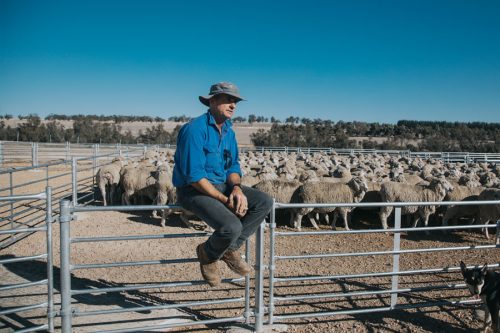 Now, more than ever, the working dog is truly a man’s best and most reliable friend.This was evident at the Casterton Kelpie Muster and Auction on the June long weekend.

Atlex’s own stockyard designer Tom Austin sold one of his own pups from Elfinvale Stud Kelpies in Melville Forest in Victoria. 12-week-old Elfinvale Borrace sold for a massive $3,000.

The highest priced-dog sold for $15,000. Two and half year-old trained kelpie, Whiskey, from handler Jack Leonard, was bought by Trent Bettsie from Keith, South Australia.

This is indicative of the importance of the working dog in this day and age, as farmers grow more reliant on their dogs and their yards to maintain an efficient farming operation.

Current climatic conditions and reduction in available skilled workers are factors influencing a big push towards working dogs who help efficiency and productivity.

In drought conditions, working dogs are one way people are looking at reducing labour costs.

The top price was higher at the Jerilderie Working Dog Auction in February where Shaun Maurer set a new Australian record price for a working kelpie by selling Eveready Possum for a price of $25,000.

Mr Maurer suggests that the drought has made people choose quality over quantity.

“In the past 12 months, I think farmers have realised they can have one less employee and a couple of good dogs to do the job,” he said.

The idea that a good quality dog can reduce operating costs through reduced labour requirements is supported by Guy Hull, author and dog behaviourist.

“Set the environment for success, this helps the growth of a good young dog,” Mr Austin said.

“A good set of well-designed sheep yards will allow you to position yourself appropriately around the flight zone, allowing the dog to do their job and effectively work the sheep in and through the yards.”

Good yards will also ensure the longevity of your dog.

Atlex designs include safety manways with dog flaps that make it easier and safer for people moving throughout the yards as they don’t have to open or climb over gates.

The safety manways also feature dog flaps, so your best mate doesn’t have to jump over or squeeze under fences risking injury. If age is a concern, older dogs can work effectively as they move easily throughout the yards.

Bob Hall (Darkan, WA),who this week was awarded an AM for his significant service to the wool industry, and to the agricultural sector, once said:

Lucy Shortis grew up on a sheep and cattle property near Uralla, NSW. She is now based in Dubbo, having worked in the agricultural sector since obtaining her Bachelor of Animal Science at CSU Wagga five years ago.  Lucy is the Marketing & Sales Coordinator at Atlex Stockyards, and spends her weekends on her partner’s cattle property near Nyngan, NSW.