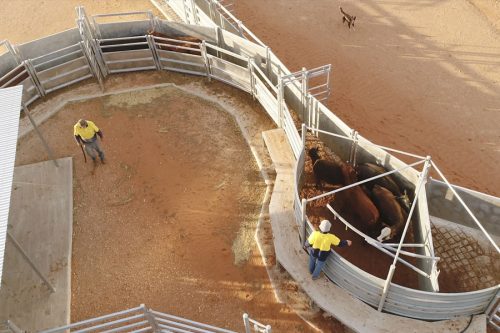 As cattle are getting heavier, cattleyard safety is more important than ever.

Statistics show in the Angus breed there have been increases of two kilograms per year on average since 1989, a dramatic increase in the last three decades. Mature cow weights have increased an estimated 100 to 150 kilograms since the 1970s.

Meat and Livestock Australia anticipates by 2021 carcase weights for all adult slaughter cattle, grass and grain-fed, including cows and yearlings will exceed 300kg.

Producers who have previously selected cattle for increased growth are now asking the question whether carcase weights are too large.

In the past the primary producer focus has been fulfilling consumer needs and producing optimal primal cuts for the market. Now we should include the issue of safety.

Producers are now working in proximity with larger, heavier animals which increases the working risk. There have been five deaths and 56 hospitalisations in three years…these statistics and safety cannot be ignored.

In response, Standards Australia has confirmed they will hold their first meeting in July to develop a national standard for loading ramps and forcing yards.  Expected to be in place in 18 months, it’s understood it will be based on the Australian Livestock and Rural Transporters’ Association Guide for Safe Design of Livestock Loading Ramps and Forcing Yards – a standard which Atlex ensures it aligns all product designs.

Atlex Stockyards customer Tony McManus (Gooree Park, Mudgee) agreed safety is a critical issue. “We had an old set of wooden yards which were very hard to work cattle in and dangerous. Safety is a big issue when you have different people working with different levels of experience,” he said.

By improving the infrastructure of your cattleyards you are increasing the safety of you and your cattle. If you chose yards that incorporate animal psychology design principals, stress is alleviated for animals and handlers alike.

The rotary force is one innovative example of how good yard design effectively manages flight zone, while maintaining separation between the handler and animal. With the ability to operate from a walkway or the ground, the rotary force is sheeted to eliminate distraction and encourage free flow and forward movement of cattle with no turning.

This is one feature whose benefits were highlighted by Atlex Stockyards customer, Jason Carboon (Elgee Park, Merricks North), who engaged Atlex after WorkSafe identified issues in their yards. Their yards are now not only safer but more efficient.

“The flow of the cattle in our old yards used to take a very long time to get them to the race and it was quite dangerous – you had to get in the pens and work with the animals a lot longer. Now with the Atlex system we can walk alongside them, it’s all on the outside, it’s safe, the cattle just funnel through.”

Safety manways included in cattle yard design allow handlers to safely and easily navigate around the yards without climbing or opening gates. Non-bruise Universal slam shut gate latches, allow the handler to be outside the gate impact zone while closing gates.

Another important factor in increasing safety in cattleyards is ensuring quality materials are used that can withstand pressure from heavy animals. High quality, galvanised steel focusing on strength and durability ensures the yards remain in safe state for generations.

Mr McManus explained the benefits of well-designed yards with quality materials: “The ability to do a job with just 2 people without having to get 4 or 5 people over like we use to in the old wooden set…cattle work is quicker and quieter, loading trucks takes half the time.”